Back: Claret laced with white at the shoulders; becoming darker blue of a shade similar to that of the head over the rump.

Body and stern: Underbody and abdomen- creamy white. Cream color gradually changing to claret at the breast. Flanks- rich claret with delicate frosting, cream frequently forming a narrow band on upper edge of covert just below the wing. Stern- pale blue of a shade similar to the head.

Male in eclipse: Closely resembles the female in color.

Common color defects in male: Lack of cream frosting on breast; black rather than brownish overlay of color in wings; loss of color at throat and/or upper neck, pure yellow bill.

Head: Base color is creamy white with butterscotch crown and butterscotch eyestreaks forming a distinct contrast to the cream color.

Bill: Pale yellow shaded with a bluish brown saddle. Bean: often lighter in color than the rest of the bill.

Neck: Cream base color with a butterscotch band extending down back of neck from the crown to the base of the neck.

Body and stern: Back- Butterscotch edged with cream often showing a pale blue streak at the feather shaft. The markings frequently grow lighter and less distinct as they approach the stern. Flanks- cream with pale butterscotch speckles.

Female in eclipse: Darker in all sections with most markings less distinct.

Disqualification: Total lack of the characteristic eyestreaks in the female. 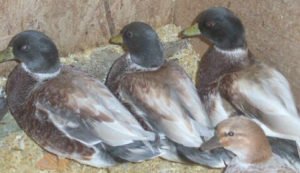 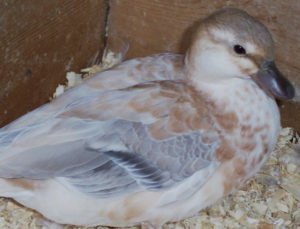 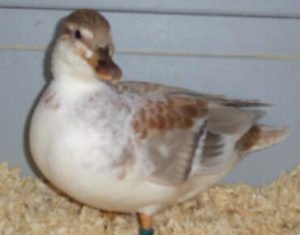 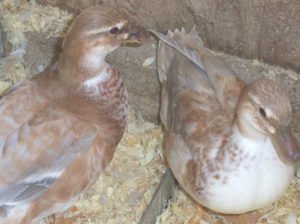 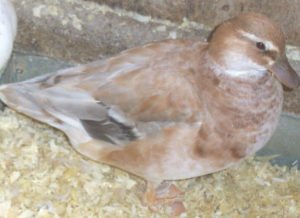